There is little as beautiful as a swamp in all its putrid glory and no better way to enjoy it than to get down on the ground, mud and water and plough through it. Although Hog has blazed several trails it is always more fun to leave the beaten path and sink into a newly discovered mud hole. Most trails connect with the Scatter Point, the landing Hog habitually uses for his explorations.

Gator Walk
This trail has its head near the Watch House and was established when Hog hunted down a large gator that had gotten to close to the premises. It is a one-way trail that ends in a shallows that has been recently cleared. Trail length: 1.5 miles. Trail difficulty: moderate. Gaters are damn hard to catch. 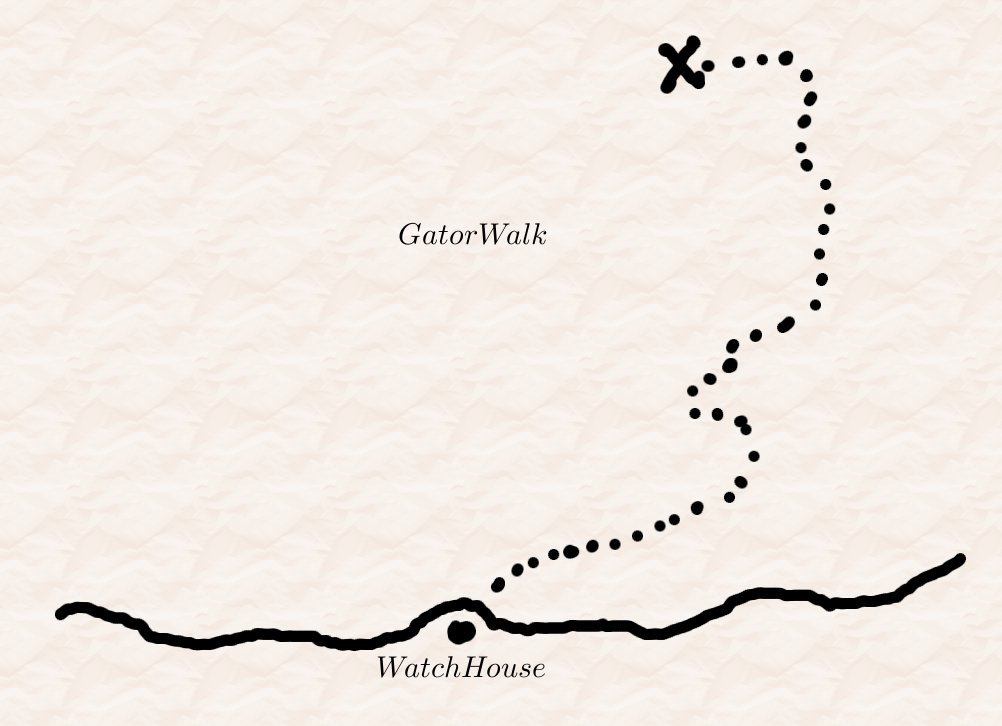 Grendle's Mere
This trail has its head near bungalow #6 and ends where there is an unexpectedly deep hole. The hole isn't marked, but you'll know you've reached the end of the trail when you fall in. Trail length: 0.6 miles. Trail difficulty: easy. 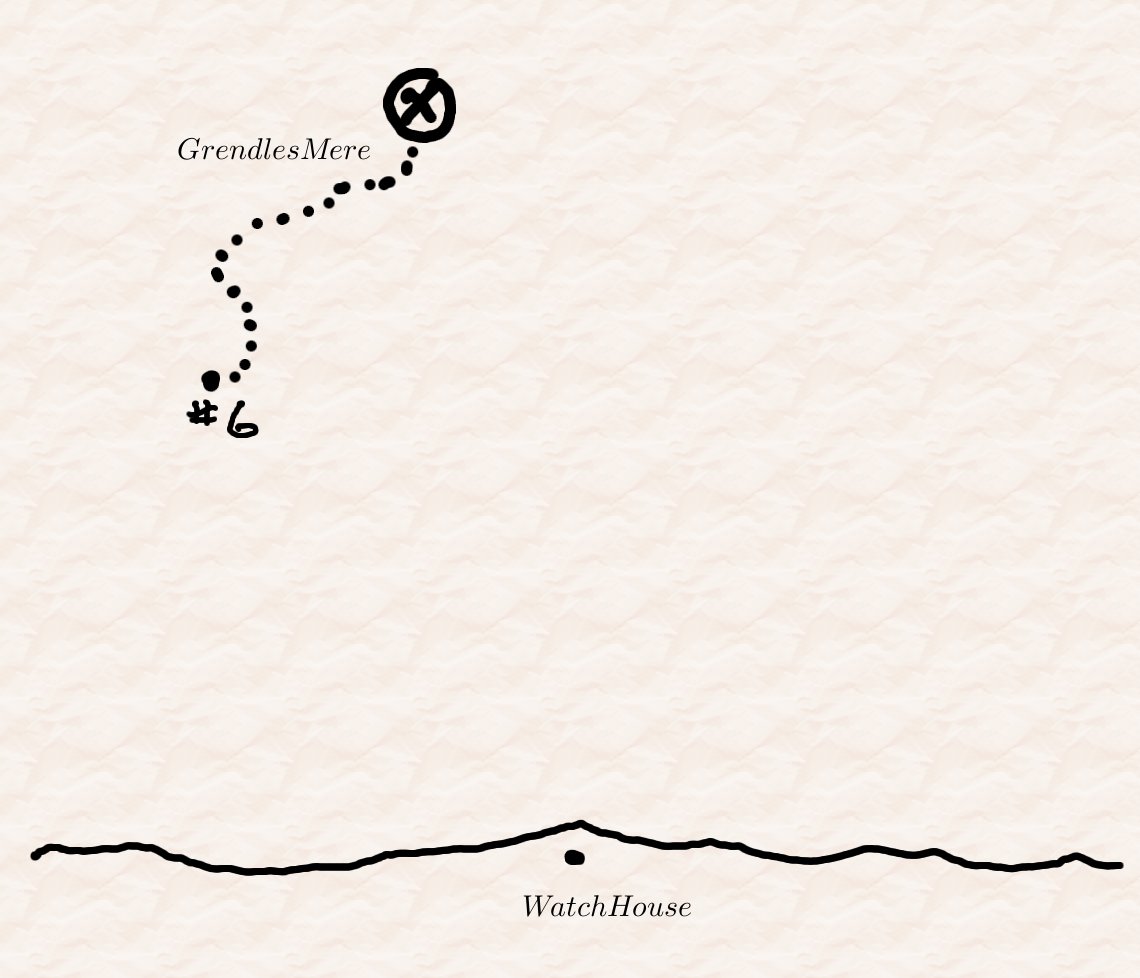 Over Water
This trail has its head at the cottage cluster and debouchs around bunglaw #9. It is characterized by elevated walks over the water built on temporary pilings Hog sank five years ago. Trail length: 5 miles. Trail difficulty: easy. 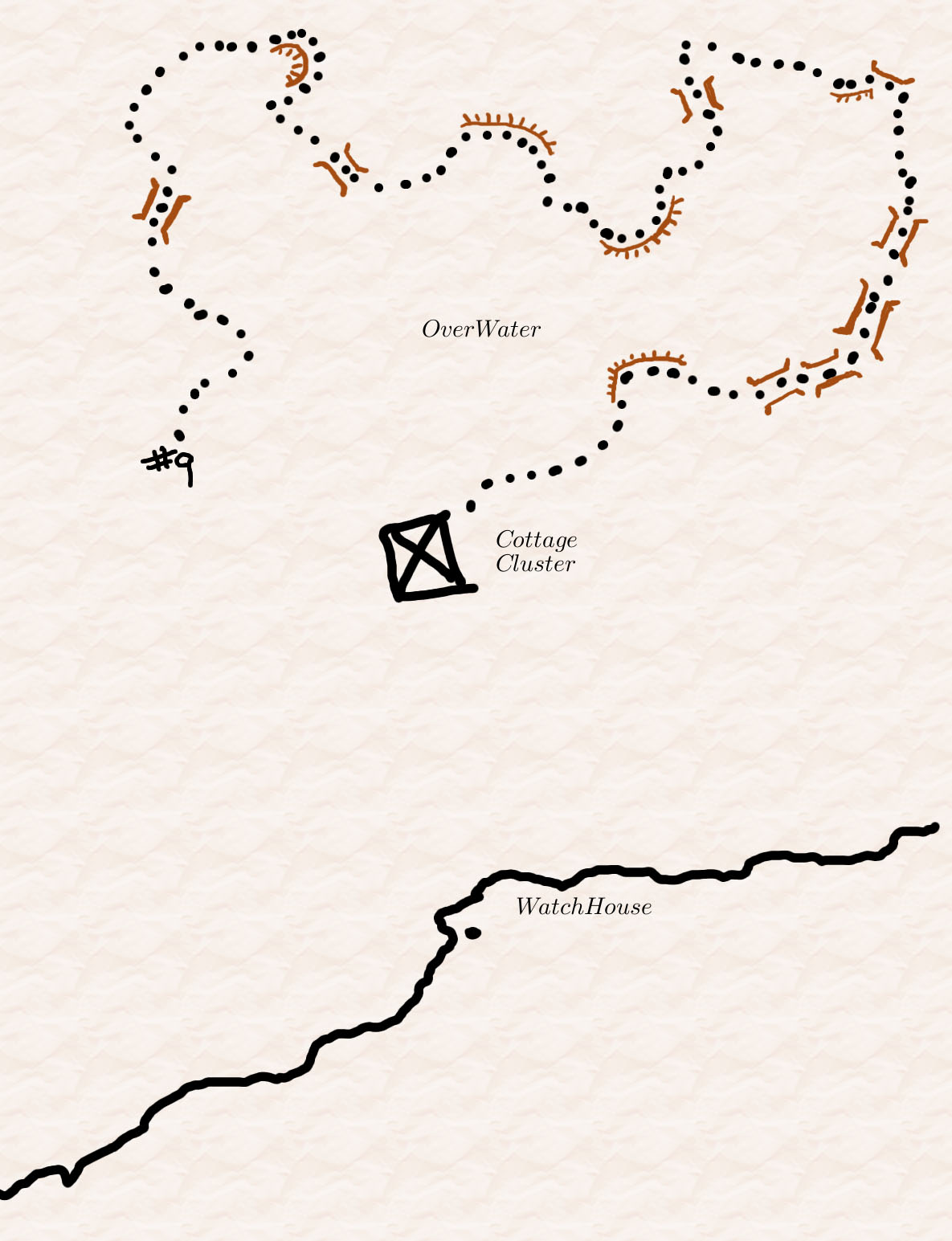 Roundabout
This trail has its head a couple of hundred hards from the Watch House at a tie-up. It goes around Hog's Swamp and has multiple interruptions to increase interest. Some causeways still intact, most trail markers in place. Trail length: 20 miles. Trail difficulty: moderate.

Lynch Landing
Your saga begins at historic Lynch Landing, under the watchful eyes (and shotguns) of the Watch House. From the newly refurbished and nearly hole-free boat dock, you can still see the towering old mangrove where, in bygone days, runaway slaves, runaway slave owners, and runaway Yankees were hanged.
Marsh March
Splash across four vividly scenic miles of bog, swamp, marsh, fen, mud and quagmire. There are relatively few alligators here so you can relax and enjoy the numerous waterfowl, frogs, snails, mosquitoes, leeches, and waterborne parasites. C'mon, get your feet wet up to your chin!
Razorback Ridge
Scramble over a high ridge of blissfully dry scrub forest, thick with wild rose, blackberry, greenbrier, locust, devil's walkingstick, stinging nettle, cocklebur, and vicious wild hogs (no relation to Hog, but just as dangerous). Tusk wounds should be treated promptly to reduce the risk of infection (Troll's Fine Shine is the best antiseptic we know).
Serpent Stroll
This shady arboreal wonderland supports a variety of venomous snakes and constrictors from all over the globe. Of course there's plenty of puddles so you won't miss out on the water mocassins and Hog's favorite, the giant anaconda (genuine import). Watch those low-hanging branches, and mind your step!
Gator Crossing
From the picturesque cypress-log-and-bailing-wire bridge, you can see hundreds of colossal alligators basking in this pristine estuary. Be sure to bring a camera and plenty of ammo. The bridge is less likely to collapse if you cross one at a time. Last one across is a quiche-baking carpetbagger!
Wayside Shelter
“Four star” cabin equipped with modern amenities including a latching door, partial roof and fire pit; maintained annually. Stylish rustic decor with outdoor hygiene, cozy mud floor, and bones left by genuine predators. A comfy, convenient place for survivors to rest, regroup, reload and regret. At night you can see at least four stars through the authentic bullet holes in the walls.
Riverwalk
On the banks of the beautiful Dieumetuer River, you'll find a botanical bonanza, including 19 of the 17 known species of contact irritant plants, razor-sharp thorn wattles, and the world's largest poison ivy bush. Carnivorous plants found only in Hog Swamp feed on insects, rodents, birds, turtles, sandwiches, and you, if you're not careful.
Swamp Romp
Nowhere else is the pure natural beauty of Hog Swamp so evident. Literally trillions of mosquitoes and biting flies fill the air with the gentle purring and iridescent shimmer of their wings. Watch for leeches the size of your fist, rare venomous lizards, man-eating alligators, and giant pythons. If you're lucky, you may even sight the exotic poison arrow frog! Remember, to get out of quickmud, lie on your back, spread your remaining limbs and “swim” with a slow backstroke.
Cannibal Point
On this beautiful shale outcropping overlooking a spectacular view (and scent) of Stanqmore Bayou, the Shiddiewaddah tribe once roasted and ate its feeble, humorless or otherwise undesirable members. You yourself may have a companion who isn't quite pulling his delicious weight. Aren't you hungry by now?
Malibu Tree
The ultimate mystery! Perched in the upper branches of a giant mangrove is the rusting hulk of a 1964 Chevy Malibu. Neither science, hoodoo, nor drunken speculation can explain how it got there, but ancient Indian legend says that looking in the trunk can cause spontaneous combustion. Climb up and have a peek!
Old Latrine Pit
Centuries ago, the Trenchfoot clan of the Shiddiewaddah tribe which then inhabited our bountiful wetland used this natural sinkhole to bury cursed relics and the carcasses of diseased animals. Later, settlers expelled from Starvin Parish for unnatural practices used the spot as a latrine and trash pit. Today, the adjacent well supplies Hog's Hangout with our famous “Sippin' Juice”. Try some, if you make it back.
Slimybottom Creek
You're almost there! Wade with wary water moccasins, or thrash through the thorny brambles on the bank — it's your choice! Either way, the footing is as treacherous as a carpetbagger, so watch your step. You and any surviving companions will have some memorable stories to share at the next Thursday night barbecue.

Castle Rassle
Ending at the Castle, the trail starts at the Scatter Point and takes a scenic route through the swamp. Portions of the trail are underwater some parts of the year, especially after particularly heavy rains. Trail length: 6.3 miles. Trail difficulty: hard.

Established paths are not inspected and irregularly maintained. Logs may be rotten, eaten through, or otherwise no longer providing support. By embarking on a hiking trip you agree to indemnify and hold harmless Hog, Hog's Hangout, its employees and other guests from any damage or injury that may result from undertaking said trip.

I really respect Hog for keeping it real in his swamp. There's no phoney electricity and they don't cut the meat with soy beans. Rare steaks aren't and swamp garlic is really something special. I only wish I could stay there forever, but I have responsibilities here to the Militia. But a great time, really. Looking forward to my next vacation down south.